On August 10th it was a bit breezy so I decided to take a different kind of kayak trip.

I decided to see how far I could take my kayak up Clay Brook in Orford, NH. I figured there would be less breeze there compared to the river or a lake.

I put in at the covered bridge on River Road. I had to carry the kayak down over a steep bank but it was manageable. 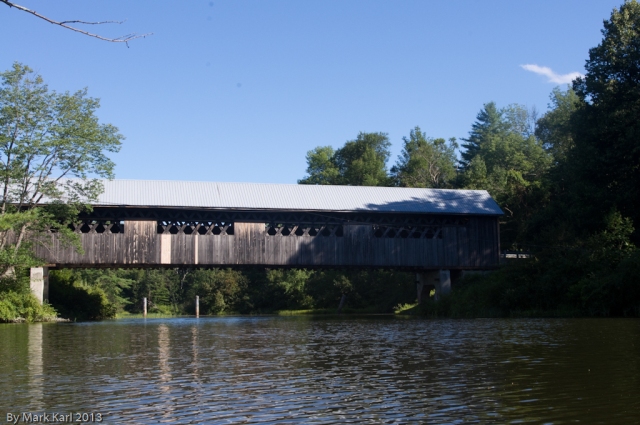 It turns out that the lower part of Clay Brook is a great place to see Dragonflies and Damselflies. 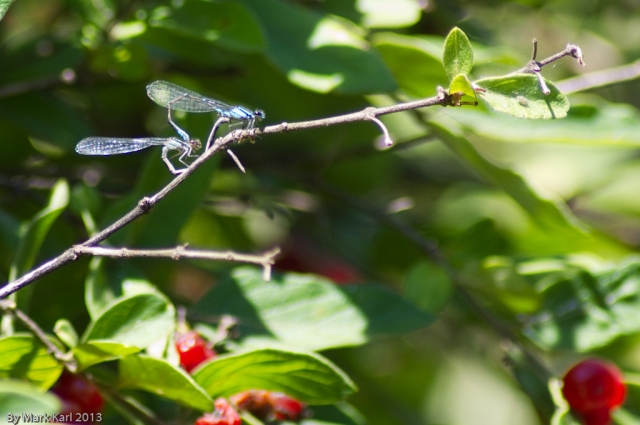 Much of the river bank was lined with Winterberry bushes, which made a nice background for dragonfly or damselfly photos. 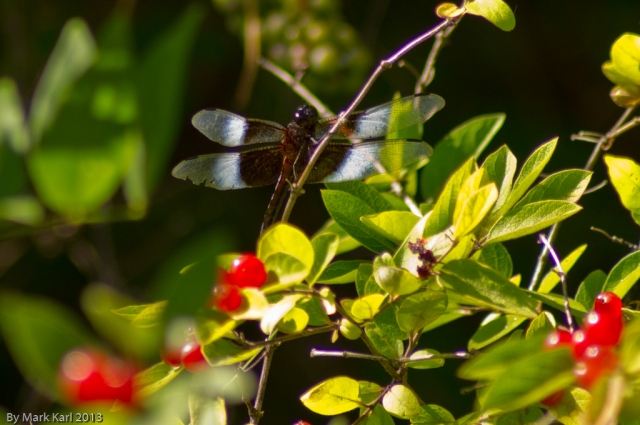 I believe the dragonfly species above is a Widow Skimmer. 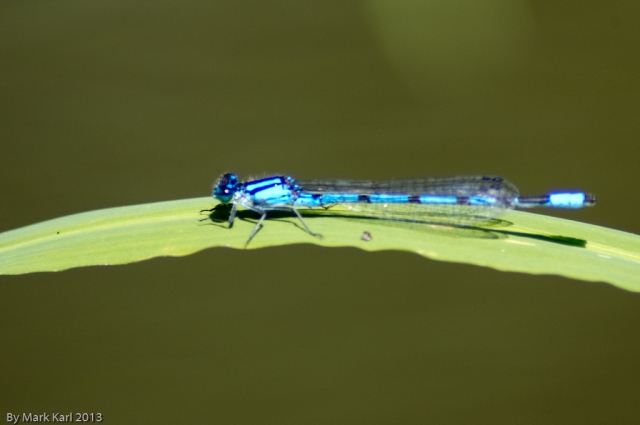 There were many damselflies on the brook like this Common Blue Damselfly above.

Once I got back past several bends in the brook I hit a large grassy area with several narrow channels through. I went down a few wrong ones before getting back to the main channel in the brook. I made it to the section of the brook next to Route 10. 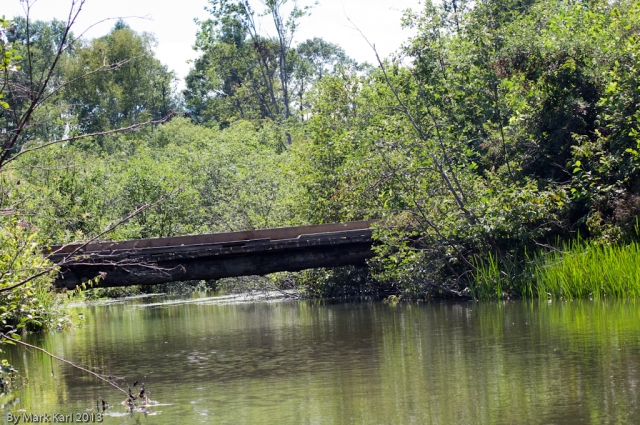 I made it to a small bridge crossing the brook and decided not to go under. On the way back I spotted several other dragonflies and damselflies. 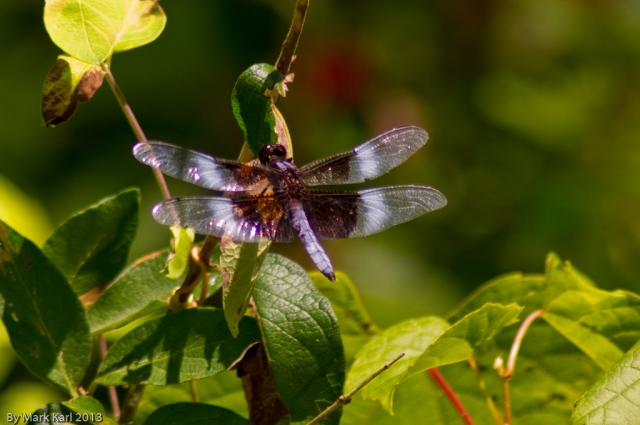 Another Widow Skimmer. Since they don’t land very much or for very long they are challenging to photograph. 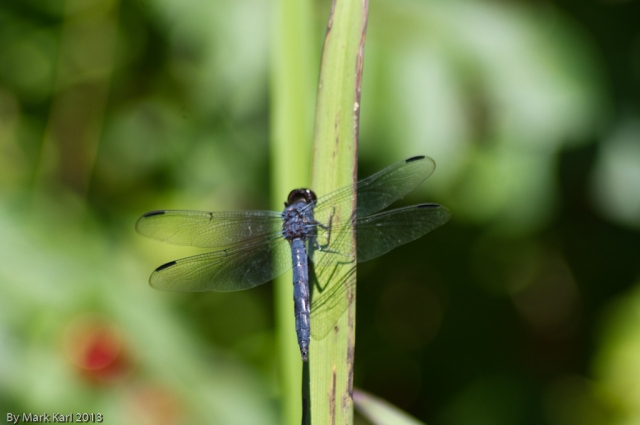 This looks like a Slaty Skimmer to me. There were several other species present that I was not able to photograph. 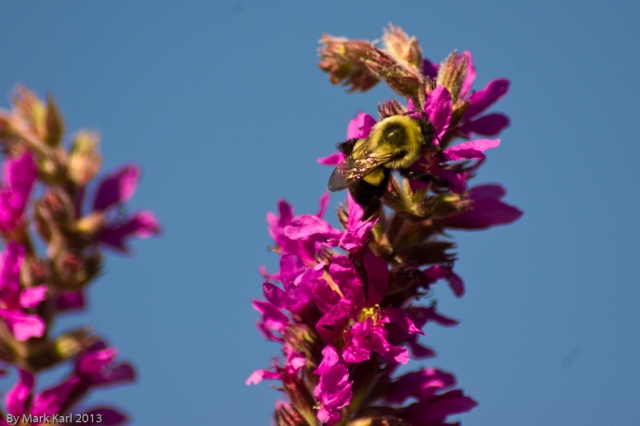 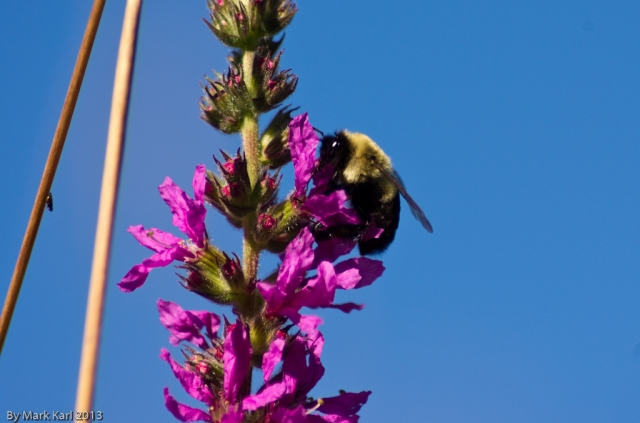 Later I took a quick tour out on the river. At the mouth of a small brook coming in on the Vermont side I noticed some bumblebees on some purple flowers.

It was an interesting trip that I would like to do again. Perhaps I can get some new Odonata photos with more close-ups and some different species.

On Saturday, August 3rd I returned to the Connecticut River for more kayaking since I had such a good trip earlier. This time I put in at the Wilder Dam boat launch and headed north to Hanover and Mink Brook.

This is the same trip route as a New Hampshire Audubon trip that is planned on the morning of the annual meeting in September.

When I arrived there were Canada Geese feeding right off of the boat landing. I was able to get the first few photos from shore.

Once I was heading up river I started to see lots of Black Ducks. 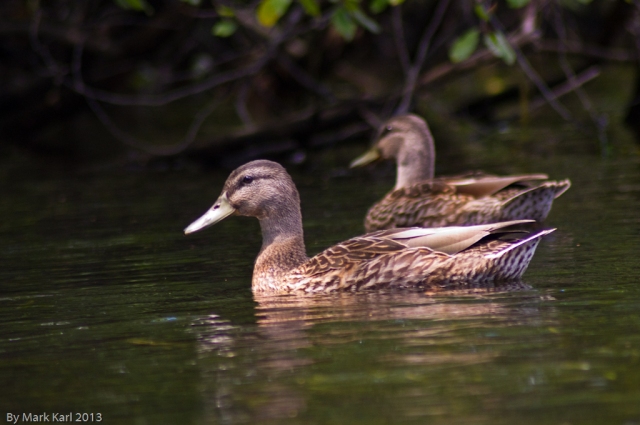 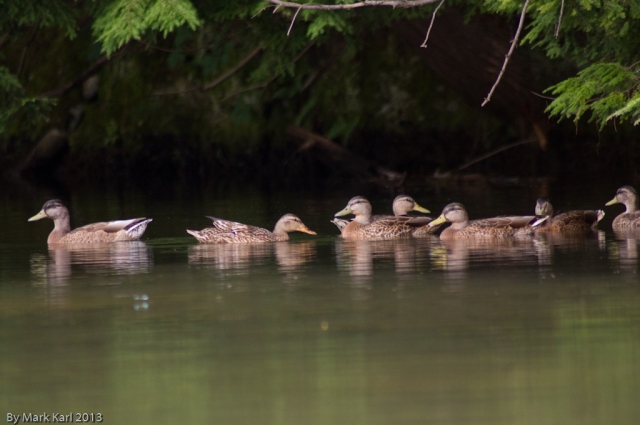 Many of the ducks were in family groups with the young at a variety of ages. 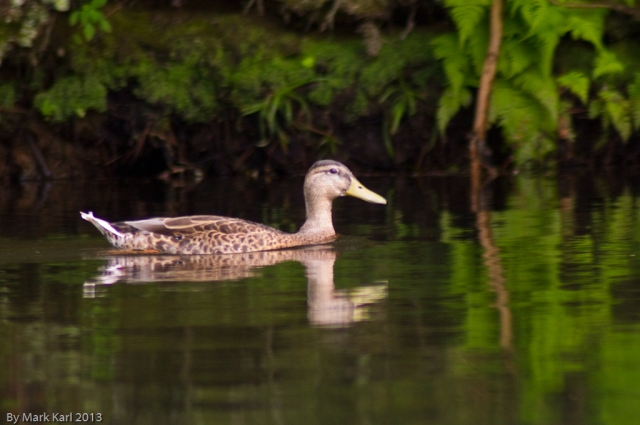 I’m embarrassed that I was caught by surprise by a Heron. It was standing absolutely still on the shore and I drifted right by and did not see it until I was too close and almost past it. I was scrambling for my camera but was far too late for really good photograph. 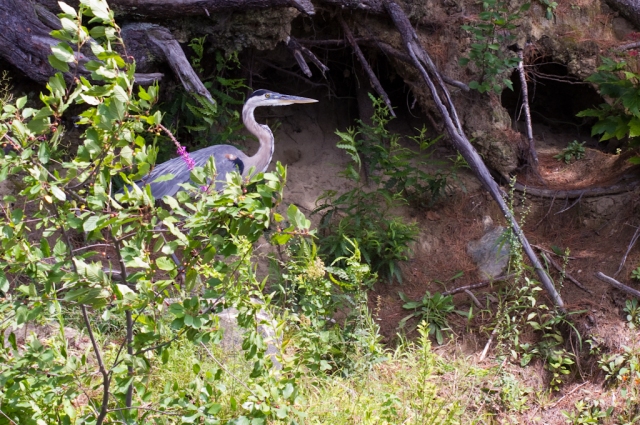 I hoped I would have another chance on the way back. 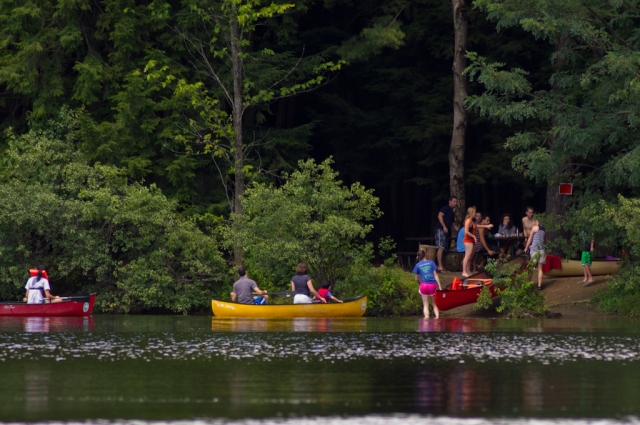 I noticed a whole bunch of people canoeing and having a picnic on Gilman Island. I did not know there was a picnic table on the island until now.

Near the island I noticed a duck diving for food. I did not think much of it until I looked at what it had in its mouth. I was surprised to see it had a snail. I could not believe the duck was really going to eat a snail that large. 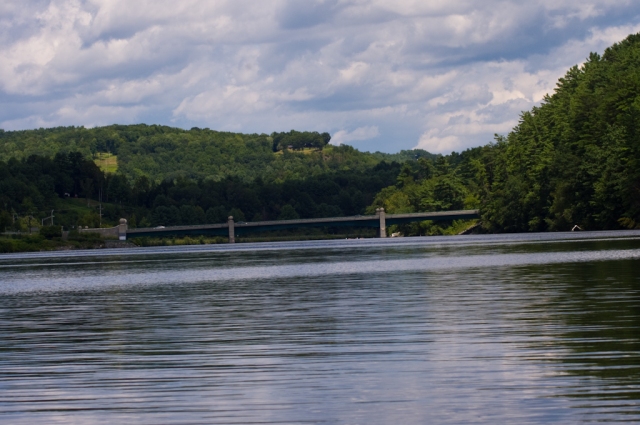 I spotted Ledyard Bridge crossing from Hanover, NH to Norwich, VT. Mink brook is just off to the right. 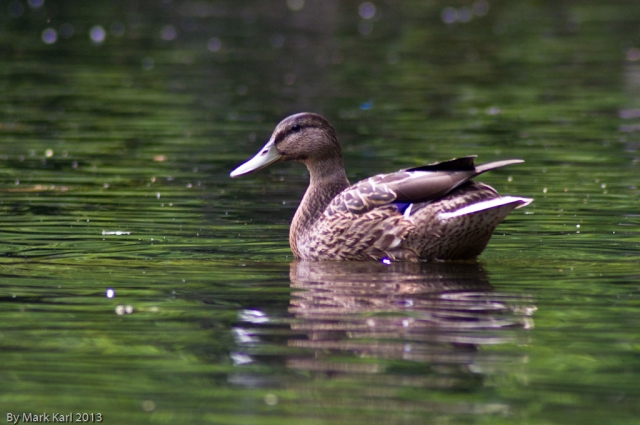 I made it into Mink Brook and started to see more Black Ducks. I think this one was sleeping as I slowly drifted around the corner and came up behind him. Although it work up and moved away I as able to get a few close photos before it got too far away. 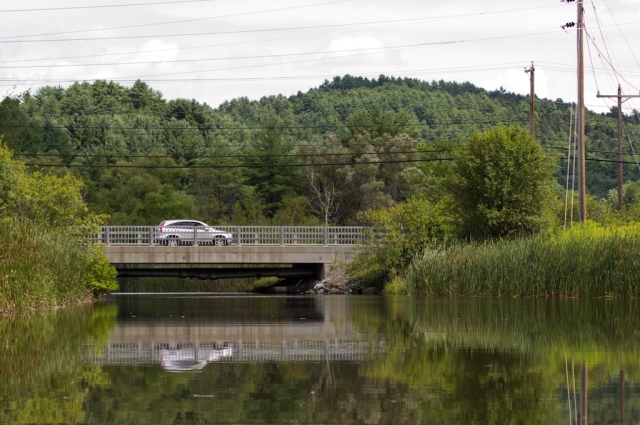 I made it all the way to the bridge that crossed Route 10 just outside of Hanover. I decided to turn back. 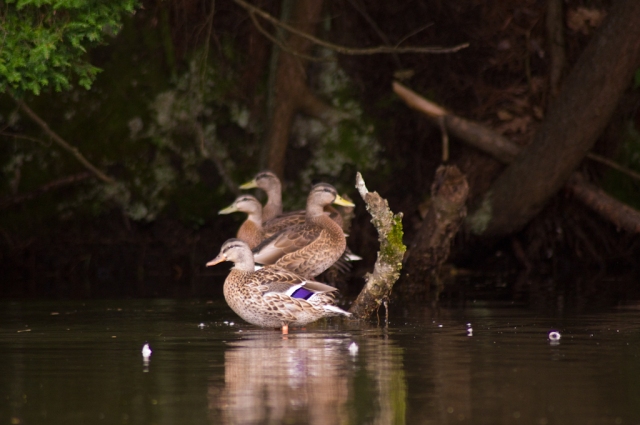 On the way out I was lucky enough to come upon four ducks all lined up on a log. I was able to drift pretty close before they decided to move along. 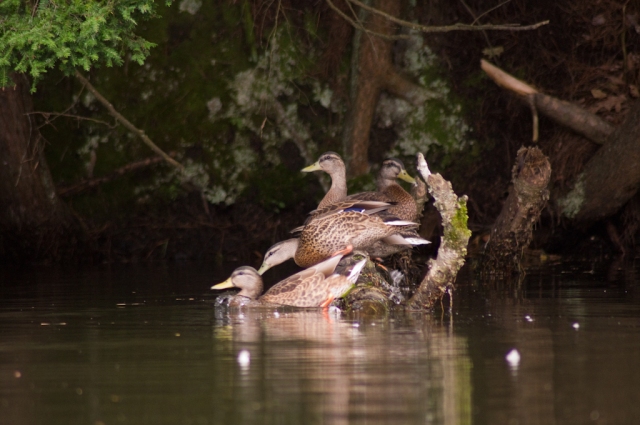 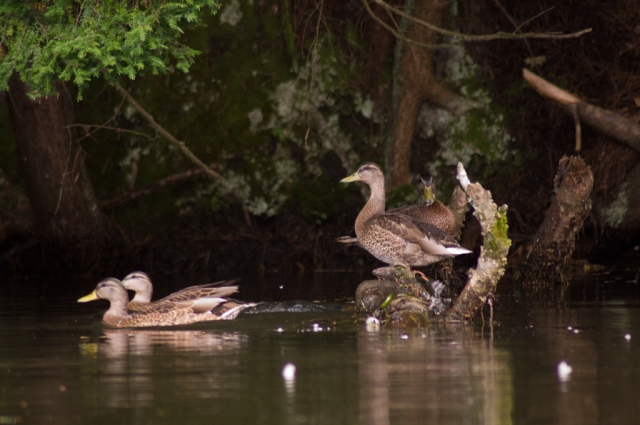 This time I was on the look our for the Heron that I missed photographing earlier. 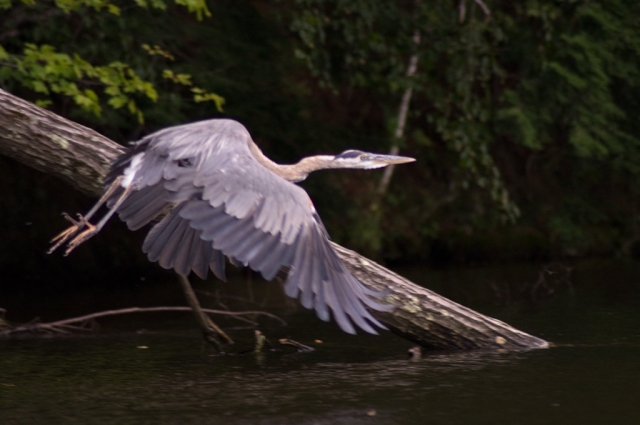 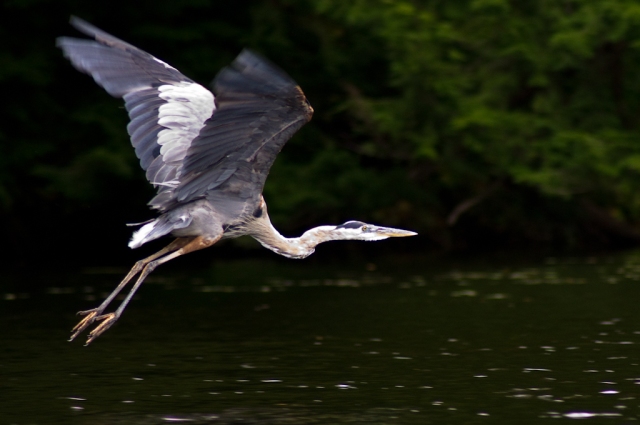 It was still skittish and did not let me get too close. I did manage to get a couple shots of the heron in flight. 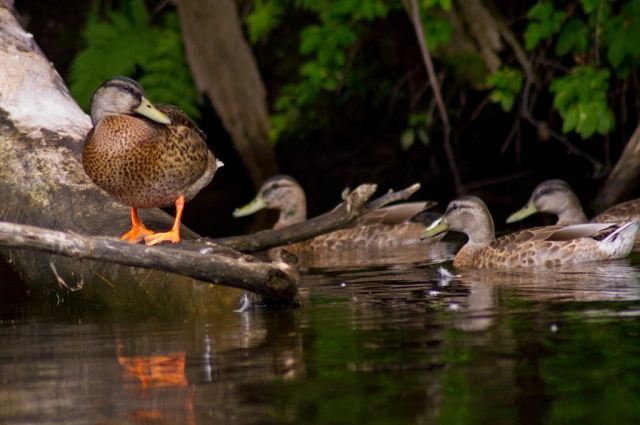 I got one last Black Duck photograph before I hit the Wilder boat landing.

That is a great stretch of river that I will be sure to return to again.

On Sunday the 28th I spent the afternoon kayaking on the Connecticut River and the delta of the Ompompanoosuc River. I had not been to the “new” boat landing on route 10 in Hanover named Wilson’s Landing.

From my trip planning using Google Maps I could see Wilson’s Landing was close to the Ompompanoosuc River and would be a short paddle.

Wilson’s is a great site to launch a kayak since you can unload near the water and park nearby. It is also very close to home!

Just north of the landing I encountered a guy fly fishing from his kayak. 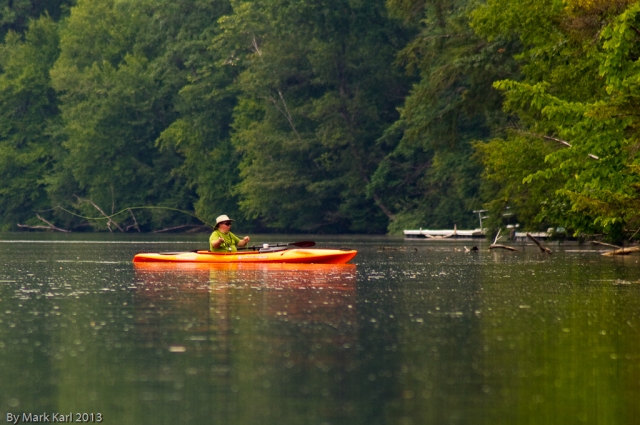 I was watching a family of Black Ducks paddle around.

The ducklings were very cute. Just then a water skier zipped by. 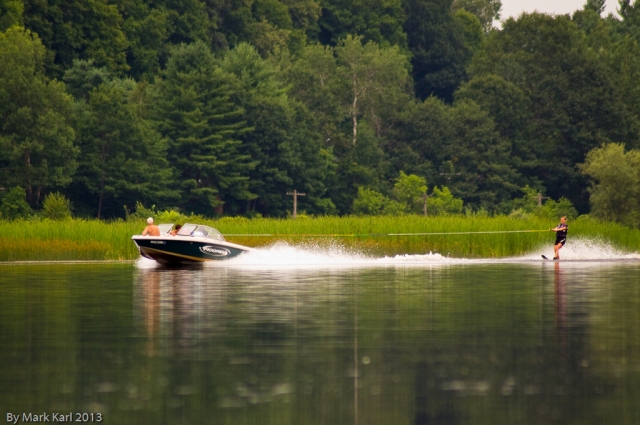 The ducks had enough of all the commotion and took off.

I continued up river to the railroad bridge that crossed the mouth of the Ompompanoosuc River.

I was near the bridge just as the Green Mountain Railroad “Tea Train on the Connecticut” Sunday trip was heading south to White River Junction, VT. The train is actually going backward in this photo.

Once under the railroad bridge and the route 5 bridge I started seeing ducks.

I watched this one fly in alone to corner of the back-in. I paddled over to snap a few shots.

It actually looked like one of its legs was injured. I could see one sticking up out of the water at a strange angle. It looked like it was having problems swimming as well.

I moved on and headed to the main channel of the Ompompanoosuc. It got so shallow for a while I had to pull the rudder up. When I finally hit the main channel I came around patch of grass the encountered a flock of Canadian Geese.

I had just put my camera away, convinced that I would not see anything else as I paddled back to the boat landing. How wrong I was.

I spotted a Great Blue Heron standing still in the grass on a little island on one side of the channel.

After scrambling to get the camera out I quietly drifted closer as it returned to fishing.

After a while it had enough and took off. I got lucky with my last shot and got the Heron just taking off.

Wilson’s Landing to the Ompompanoosuc River is a great kayak route that I will be sure to do again!