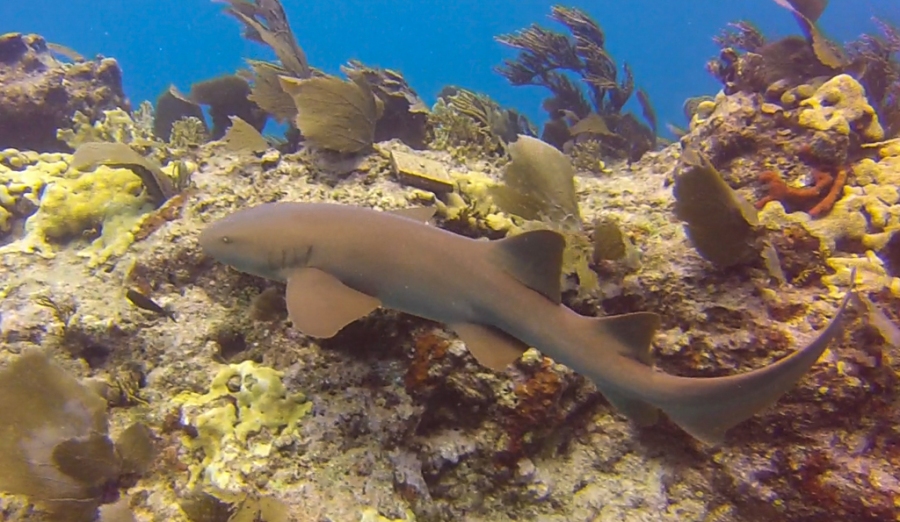 At the end of June I was able to spend a week in Key Largo diving at the Florida Keys Marine Sanctuary. It was a rough week due to the weather, wind and waves. Lots of people got seasick on the dive boats (but not me!). Dive trips from Sunday afternoon to Wednesday morning were cancelled due to high winds and five to eight foot waves.

So I had a couple days to relax and do other activities. I took a short course at Rainbow Reef Dive Center to get my PADI Emergency Oxygen Provider certification. It was a fantastic course and I think  learned a valuable new skill that could help later if i take the rescue diver course.

I also had time to enjoy some long lunches at Skippers Dockside (formally known as Coconuts). I was finally able to have some conch chowder again, which is a dish you don’t see much in New Hampshire. It’s a little spicy so it sure hit the spot on Sunday afternoon when it was pouring rain outside. 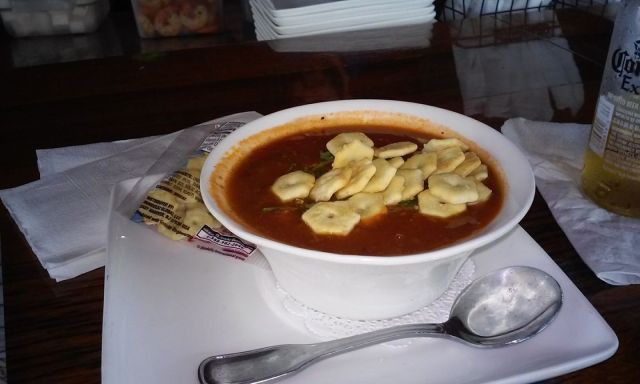 The sign outside the men’s room made me chuckle. 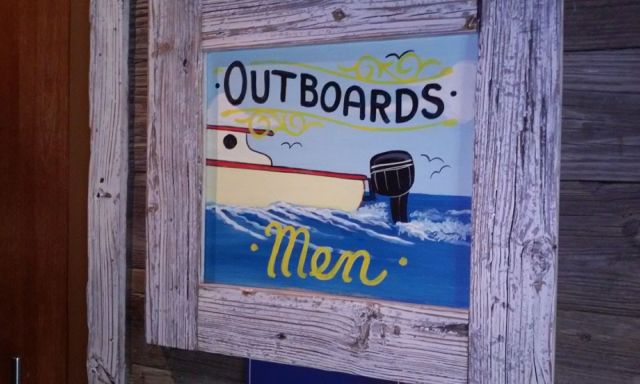 On Tuesday afternoon I was hanging out at the hotel pool and talking to a women who told me about Jimmy Johnson’s Big Chill on the bay side. She told me it was a popular place (especially on Tuesdays when ladies drink for free from 6 to 7 pm) with great sunset views. Naturally, I had to go check it out. 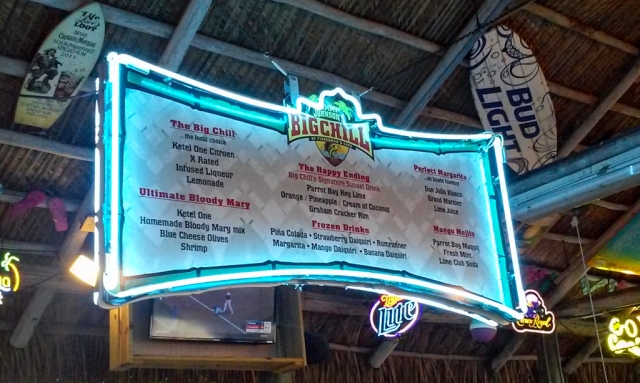 Wow, was it busy! I did well to find both a parking spot (after circling the lot 3 times) and a seat at the end of the bar. Much to my surprise the bartender I was talking to at Skippers Dockside at lunch was bar tending at The Big Chill that evening. Although it was too cloudy for a great sunset they did have a nice outside tiki bar and deck with a great view to the west. The band was playing a nice mix of 70’s and 80’s tunes.

Of course I was impressed with the statue of Captain Morgan. 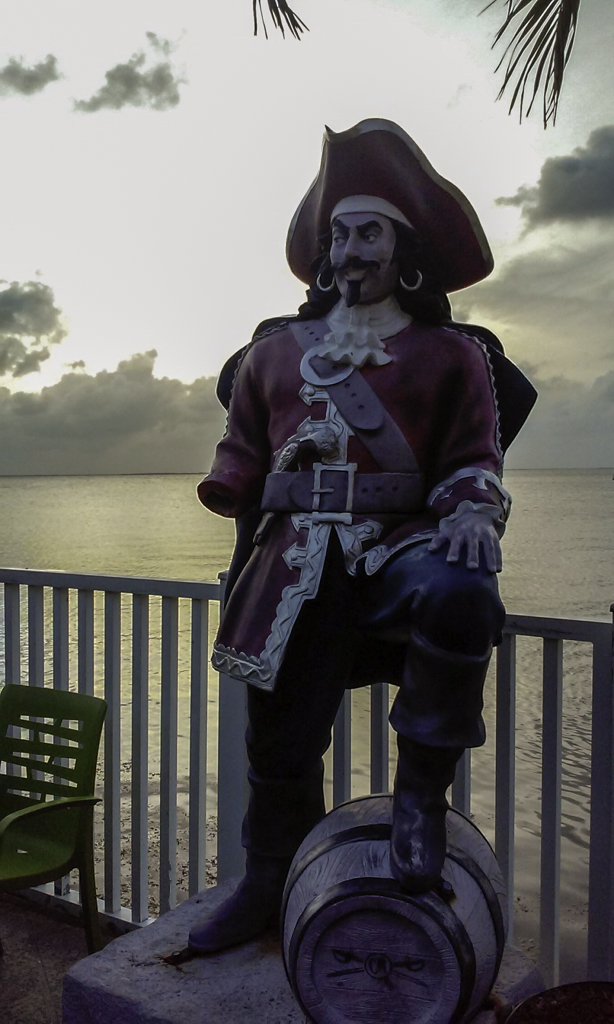 We had higher than usual waves for the rest of the week but it was manageable. During the trip I had several memorable sea life encounters and even got video footage of a few of them.

On Wednesday afternoon I was trying a new underwater video camera. It was an Intova X2 Waterproof Action Camera. It was a good first experience with the camera. I need a few more accessories like a tripod mount adapter and handle to get better video footage. However I did see a nice Queen Angelfish to watch for a few minutes.

On Thursday morning I switched back to using my GoPro Hero 3. Due to the waves and current we returned to Molasses Reef. During the dive I enjoyed watching a Porcupine Fish swim around for awhile.

On the Thursday afternoon dive we encountered a school of beautiful Yellow Jacks.

The second tank dive on Thursday afternoon was at Eagle Ray Alley. We saw three dolphins! This is the first time I had seen dolphins underwater. They swam by way to fast for me to get video footage but it was still thrilling to see them.

On Friday morning we were on Molasses Reef at a site named Aquarium. Within a few minutes after starting the dive a Nurse Shark swam right by me. This turned out to be one of my favorite video clips from the trip.

During the afternoon dive our group had special encounter with two Porcupine fish. They were swimming around like a couple on a date.

Towards the end of the dive we were lucky enough to have a Reef Shark swim by.

Saturday morning turned out to be very special. I was on a dive boat that was going to Molasses Deep for a drift dive. Soon after getting in the water I spotted a Nurse Shark swimming along the bottom. A little further on one of the guides spotted a Lion fish. Lion fish are an invasive species from the Pacific Ocean that is wrecking havoc on the food chain in Florida and the Caribbean. The guides are trained to kill them and one of them proceeded to spear it and finish it off quickly with his dive knife. The Nurse Shark must have caught a “scent” of the kill. It soon came over for a visit to check us out before swimming back to the dead Lion fish.

During the remainder of the dive we saw three sea turtles. An exciting moment occurred during our safety stop before surfacing when we spotted a large hammerhead shark swimming below us. This was the first hammerhead shark I had seen underwater.

I must say that the sunrises in Key Largo are beautiful. It’s the sun behind the cloud formations over the ocean that make it special. There were several mornings I was able to enjoy a similar sunrise to the one in the photo below. 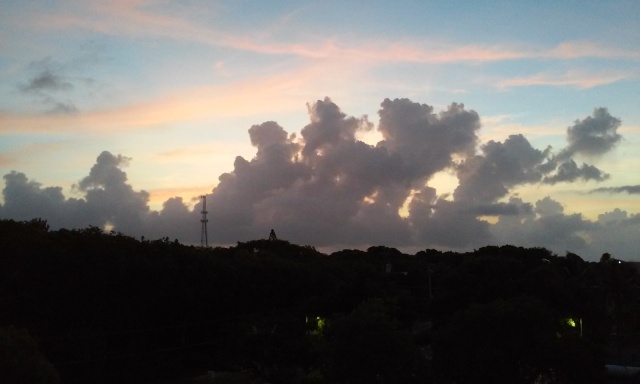