I just finished The Fort by Bernard Cornwell. It’s based on the historic battle between the British and American forces from Massachusetts in 1779. The British captured the village of Castine, Maine and started building a fort with the goal of establishing the colony of New Ireland. The Colony of Massachusetts created the Penobscot Expedition to attack the fort and remove the British. The American forces failed miserably.

The story was no “cliff hanger” since I read the history and know how the battle ended. However, it was interesting to read about the leadership issues and bad decisions that led to the expedition’s embarrassing failure. 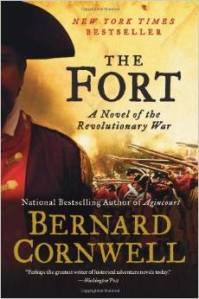 The Wikipedia article tells us, “The Americans landed troops in late July and attempted to establish a siege of Fort George in a series of actions that were seriously hampered by disagreements over control of the expedition between land forces commander Brigadier General Solomon Lovell and the expedition’s overall commander, Commodore Dudley Saltonstall, who was subsequently dismissed from the Navy for ineptness and failure to effectively prosecute the mission.”

General Lovell made a pretty good move by taking the high ground near Fort George and capturing a British artillery battery on Cross Island ( now named Nautilus Island). He screwed up big time when he dug in for a short siege rather than attack right after establishing the beach head. Commodore Saltonstall eventually agreed to attack the British ships in the harbor if Lovell would launch a coordinated land attack on the fort. Saltonstall had just started the navel attack when he got word that the British reinforcements had been sighted in Penobscot Bay. He ordered his ships to turn around at the last minute and prepared to retreat up the Penobscot River. General Lovell was wise enough to abort the land attack and get the troops back to the ships just in time.

The Wikipedia article says, “A committee of inquiry blamed the American failure on poor coordination between land and sea forces and on Commodore Saltonstall’s failure to engage the British naval forces. Saltonstall was declared to be primarily responsible for the debacle, and he was court-martialed, found guilty, and dismissed from military service.” and that, “Peleg Wadsworth, who mitigated the damage by organizing a retreat, was not charged in the court martial.”

One of the interesting facts I picked up while reading this books is that Paul Revere (of the midnight ride) was a member of the Penobscot Expedition. In fact, he was in command of the artillery. As Cornwell tells the story, Revere only played a minor part of the leadership problem that doomed the expedition. However, he did not conduct himself as well as he could have. Perhaps he recognized the growing problems and wanted to make it out alive.

Revere and his men were put ashore on the west bank of the Penobscot River. He had to return to Boston by land, which was a long trek in 1779. The Wikipedia article tells us, “Paul Revere, who commanded the artillery in the expedition, was accused of disobedience and cowardice. This resulted in his dismissal from the militia, even though he was later cleared of the charges.”

Previous to reading this book I didn’t know about this battle, so I learned something new about both Maine and Revolutionary War history.