The weather for the weekend of February 18th and 19th looked promising with high temperatures in the mid 30’s. It turned out to be a little cooler than expected due to the wind but we were ready for that. It has been a strange winter with little snow and warmer temperatures. As a result the ice is bare (and slippery) unlike last year when there was heavy snow and slush on the ice.

On Saturday we went to Indian Pond in Orford, NH. We joined our friend Kurt and a few others and set up camp near their ice shanty. There was about sixteen inches of ice on the pond.

There is a nice view of Mt. Cube from Indian Pond. It was a great lunch even though cooking was a little challenging in the wind. I brought sirloin tips and hot dogs and Kurt brought some venison to share.

We decided to go to Upper Baker Pond in Orford, NH on Sunday. We had great luck there last year and I was looking forward to going back. Once again it was colder and windier on the pond than the Connecticut River Valley. We wisely decided to set up the shanty near the shore where there was better traction.

Johnny holds the first pickerel that we landed. 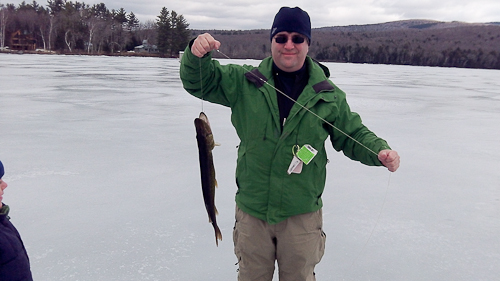 I land my first fish of the day. It was a nice pickerel that was about the same size as the one Jack caught earlier. 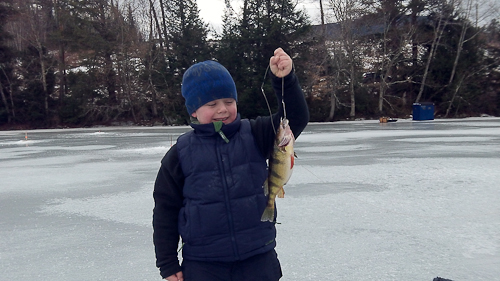 We even landed a few nice yellow perch. Johnny got a chance to practice pulling a fish out of the hole. He’s going to be a good fisherman when he gets older. Overall it was a fantastic day at Upper Baker Pond and a great weekend of ice fishing.